Slettestrand Ultra is a 140 km mountainbike race through some of the most beautiful and unspoiled nature in Denmark. Situated in Northern Jutland, very close to our family vacation house, Slettestrand has been my favorite mtb destination for several years.

Well, first thing first, I arrived friday 30th of september and had an appointment with Esben, the organizer of the race and trail builder and mtb instructor at Slettestrand Feriecenter (see my shortfilm about Esben here: https://vimeo.com/185343823). We had a nice ride at the trail, talking about long distance riding. At one point I miscalculated a bend, hit a stump and went straight into a pine tree. At first I did not feel any discomfort, but after arriving at the summer house I couldn't walk on my right leg, my shin being tight and sore. Furthermore my wrist felt bad and I had bruises on my thigh and my ankle.

During the night I woke up several times because of the pain and was slowly accepting that I had to skip the race the following day. I woke up 6.30 am when my alarm went off, had a shower and decided, no matter the cost, that I would do the race. Looking forward to 3 weeks of almost no training due to traveling plans I felt that I could justify this decision. The aim was to complete the race, and adjust the effort along the way.

I had prepared a bottle with a new recipe that I wanted to test: 3 spoonful chia seeds and a 320 gram mix of maltodextrin and dextrose, which proved to be very efficient. I had clean water in my drinking bladder.

The first section was on the beach, a nice warm up in the chill morning. Next stage led us through parts of the mtb trails in Svinkløv Plantage and Kollerup Plantage. The next 55 km was a mix of tight paths, gravel roads and bushes with no trail, really fun, challenging and beautiful. My wrist was feeling bad and I had to have my hand in a specific angle to relieve the impact, and braking and gear shifting was a challenge. My shin was still hard and sore. Early on this stage the bush holding the pedal in the left carbon pedal arm went loose and it floppy feeling the rest of the race.

Halfway, the track changed direction back towards Slettestrand. I had decided to rest at this point and have something to eat. I had a couple of bananas, peanut butter and some white bread, and after my meal I felt strong and confident. Also, the change of direction back towards the finish line made positive thinking a lot easier.

The track led us along the beach on rescue roads covered in high grass, on the beach and back to the mtb trail in Kollerup and Svinkløv. Early on this stage the rain started pouring, making the grass covered sections intensive and very wet. During the race I had to change batteries in my Garmin three times, very annoying and something I have to investigate. When reaching Kollerup it went dead again and I had no more spare batteries. After a while a group of riders passed me and I teamed up with them the rest of the race. I crossed the finishing line at 09:36:15 as number 28 out of 48 riders. I was pretty happy with this result and after some warm soup I felt really good.

Now, eleven days after the race, I still have problems with my wrist and shin, and I haven't been on the bike yet. The decision to do the race was probably not reasonable, but I know that I would have regret a call off even more. 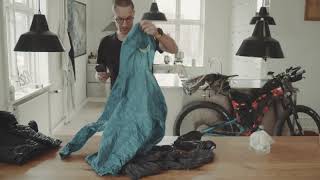